WHISE encourages stakeholders, partners and members to have their say

The next National Plan to End Violence against Women and Children 2022-2032 (the Plan) has been released in draft for public comment.

Women’s Health in the South East (WHISE) is encouraging members to have their say on this next plan as it forms a keystone to the national infrastructure for stopping family violence.

The Plan builds future work on key foundations of addressing gender inequality, drawing on diverse lived experience of victim-survivors to design effective policies and solutions, working alongside Aboriginal and Torres Strait Islander leaders, Elders and communities to end violence against Aboriginal and Torres Strait Islander women and girls and taking an intersectional and evidence-based approach recognising the complexity of peoples lived experience.

These foundations form the basis of the four pillars of Prevention, Early Intervention, Response and Recovery.

Earlier today, WHISE’s own Lula Dembele, Manager for Gender Equity, appeared on ABC TV to speak about the plan, and in particular the way the plan centres the voice of lived experience and victim survivors.

Speaking on behalf of the Independent of Collective of Survivors (ICOS), Lula Dembele welcomed the announcement from the Federal Government to commit $1 million for engagement with victim-survivors for the life of the Plan.

“The plan is a good foundation for the next stages of work to stop violence against women and a key part of that is authentically centring and working with lived experience,” said Ms Dembele. 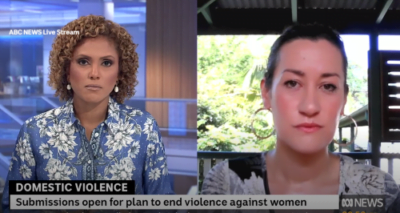 “While WHISE is focused on women’s wellbeing in our great region, documents like the National Plan are really important for our work because they set the national context that we work in,” says Ms Kit McMahon, CEO of WHISE.

“The recognition of gender inequality as a driver of family violence, and hence improving gender equality to end family violence, taking an intersectional approach and using the evidence-base including Our Watch’s 2nd edition of Change the Story is really important.”

“We are also incredibly pleased to see that the lived experience and voices of Aboriginal and Torres Strait Islander women – women who are disproportionately negatively impacted by Family Violence – are going to have their own strategy and plan.”

The Plan is now open for consultation between now and the end of January 2022 and WHISE are encouraging our partners, members and stakeholders to provide input.

The Plan is on the Department of Social Services website