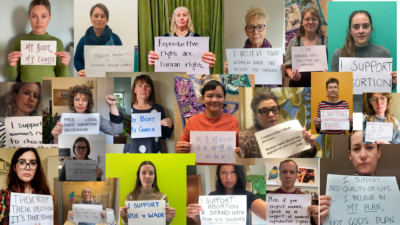 Women’s Health Services across Victoria have issued a response condemning the imminent overturning of Roe v Wade, expressing solidarity with women and people with a uterus in the United States and calling upon the state and federal governments throughout Australia to expand the provision of affordable abortion through adequate funding and prioritisation of women’s sexual and reproductive health.

“The recent leaked document from the Supreme Court, that indicates that the majority of Justices are in favour of overturning this critical legal precedent, is a significant threat to women’s sexual and reproductive health and rights in the United States,” says Kit McMahon, CEO, Women’s Health in the South East (WHISE).

“Should Roe v Wade be overturned, it is very likely that upwards of 26 states would virtually ban abortion. This will disproportionately impact women from low socioeconomic backgrounds, women of colour, undocumented migrants and refugees, and trans and non-binary people.”

The overturning of Roe v Wade in the United States also represents a fundamental attack on gender equality, and its impact on women’s economic and educational outcomes cannot be overstated.

Though legal access to abortion in Victoria is comparatively assured, the situation in the US does highlight several key gaps in current service provision and access for women and people with a uterus in Victoria.

As Women’s Health Services across Victoria stand with those in the US and condemn any attempt to overturn Roe v Wade, we call upon state, territory, and federal governments in Australia to expand the provision of affordable abortion for all women and people with a uterus.

Should Roe v Wade be overturned, it is very likely that upwards of 26 states would virtually ban abortion. This will disproportionately impact women from low socioeconomic backgrounds, women of colour, undocumented migrants and refugees, and trans and non-binary people.

Abortion is a healthcare issue. The current politicisation of abortion access in the US should signal an alarm for all who believe that people have a fundamental right to access safe and high quality sexual and reproductive health care and to make decisions about their own bodies.

In 2008, Victorian women and pro-choice advocates won a 40-year battle to remove abortion from the Victorian Crimes Act. Reflecting on this success, former Premier Joan Kirner AC noted that, when it comes to safeguarding the rights of women to make informed choices about their bodies and to access safe healthcare and support, “you do have to be forever vigilant”. The potential overturn of Roe V Wade in the US demonstrates how true this is and that now is the time to pay attention and to be vigilant.

Regardless of geographical location, safe and legal abortion is an essential reproductive health service. The additional layers of cost, isolation and feeling unsupported, as experienced by women and gender diverse people accessing a service in rural areas are inequities that already exist. We must always be concerned that abortion is seen to be part of comprehensive women’s health care and a human right.

The issue of stigma and shame is exacerbated in rural and region areas where not only are providers difficult to access, but those seeking an abortion may be reluctant to approach providers due to their community links.

The possibility of change to abortion laws in the USA is a fundamental breach of the rights of women and people with a uterus.

A decision of this nature would further add to the stigma surrounding abortion, thereby pushing the issue out of public health discourses. We must continue discussing abortion openly and without shame, in order to provide safe, equitable, and accessible healthcare.