Home > Support Us > Our Campaigns > Make Your Vote Count

Taking real action so that all women in the south east are safe, healthy and thriving.

A WHISE call to all leaders at this Federal Election to invest in primary prevention and equity so that all women in the South East have safe and healthy lives.

This federal election Women’s Health in the South East are calling on politicians and policy leaders to publicly commit to taking real action to prioritise and invest in primary prevention to support better health outcomes for all women. We do this on behalf of our community, stakeholders and partners in the Southern Metropolitan Region of Melbourne. 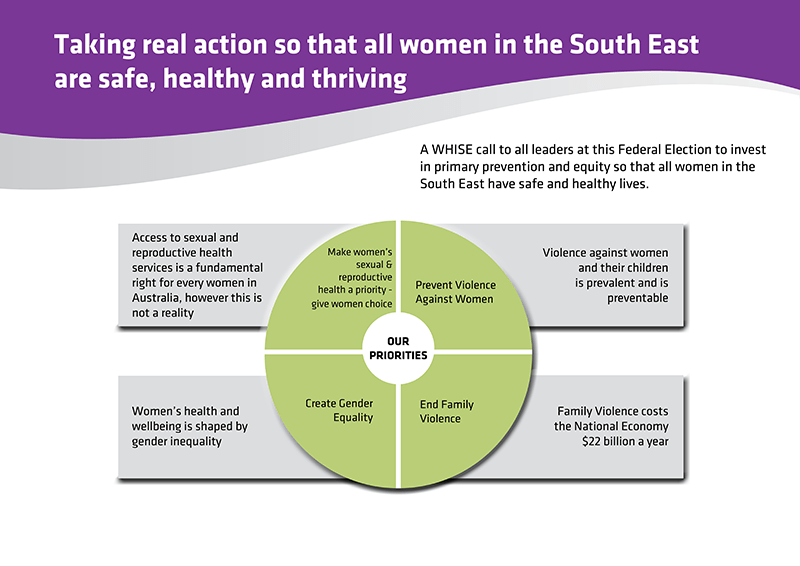 Women's health and wellbeing is shaped by gender inequality.

Unequal distribution of power and resources, discrimination, harmful gender norms and practices result in negative health outcomes for women and drives violence against women. Indicators for gender equity in the Southern Metropolitan Region of Melbourne are poor.

To change this we need:

In 2012, the Workplace Gender Equality Act established the Workplace Gender Equality Agency which is tasked with promoting gender equality in Australian workforces. There is currently no National Gender Equality Strategy that outlines in a systematic manner how we are going to achieve true gender equality in the workforce. We are asking for a National Gender Equality Strategy, using evidence-based targets and addressing barriers women face when participating in economic opportunities such as childcare affordability and options, the undue burden of care women experience, inflexible work rosters and insecure work (casual and/or short term contracts).

To achieve gender parity we need gender equality in all areas of the community, including education and training, leadership and representation, sport and recreation as well as the media, arts and religious leadership. A National Gender Equality Strategy needs to focus on all areas of community and ensure a gender lens is applied to all policies, procedures, projects and budgets.

(With thanks to the team at Women's Health Gippsland)

In the SMR, we consistently see gender inequality based on employment type between women and men, with higher rates of women employed on a part-time basis, while a very small percentage of men are employed on a part-time basis. ABS census data from 2011 demonstrated that Mornington Peninsula and Bayside had the highest gender inequality in the region with 50% of women in part-time work compared to only 20% of men in these LGAs.

When looking at 2011 census data relating to full-time employment we again see gender inequality. Port Phillip remained the only LGA in the SMR where women employed full-time ranked above the state average, demonstrating the lowest inequality in full-time employment in our region (66% of females vs 79% of males). This was followed closely by Stonnington.1

Access to sexual and reproductive health services is a fundamental right for every woman in Australia, however, this is not a reality.

Women cannot access the services they require and this is amplified in diverse populations and areas of low access to public transport and services. Supporting women’s reproductive choice is essential for women’s health and gender equality.

To change this we want:

Support for a National Sexual and Reproductive Health Strategy

WHISE supports the call to action from Family Planning Alliance Australia (FPAA) for a National Sexual and Reproductive Health Strategy (2015). Specifically, the Alliance’s recognition of the current policy challenges including a focus on single issues, lack of appropriate community participation, lack of accurate data, limited range of SRH services, variability in delivery and quality of relationship and sexual health education and sexualised media representation of girls and media. We would also add another policy issue is a lack of strong clear and funding support of primary prevention.

We agree with the FPAA that a well designed and implemented strategy with full buy-in from key stakeholders will “promote respectful equitable relationships, reduce rates of violence unwanted/unplanned pregnancies, reduce transition and prevalence of STI’s and HIV and discrimination associated with early parenthood or sexuality and gender identify and the associated poor health.”

Violence against women and their children is prevalent and it is preventable.

We know that the drivers of violence against women center around gender inequity. We know there are lots of actions we can take to stop violence well before it occurs.

But there is very little funding dedicated to prevention. Sustained investment in primary prevention is needed to prevent violence before it occurs.

Findings from the latest National Community Attitudes towards Violence against Women Survey (NCAS) show the ongoing need to invest in primary prevention at the community level to address the drivers of violence against women. The NCAS survey showed that Australians are in denial about the problem of violence with 23% of people think that many women exaggerate the problem of male violence and almost half (42%) think it is common for sexual assault accusations to be used as a way of getting back at men.  The results also show a disturbing downward trend in the percentage of people who recognise that men are more likely than women to use violence in relationships (down 22% points since 1995), or that women are more likely to suffer greater physical harm from this violence (down 8% points since 2009)2.

To overcome this we need:

Only a small amount of government funding goes to prevention. Prevention activities are often funded for short periods. But changing behaviours and attitudes is a complex and lengthy process, which requires long term investment. Failure to give greater priority to prevention efforts risks condemning future generations to the plight of today’s victims of family violence.

Unless we pay serious and sustained attention to prevention initiatives, the service system will remain overwhelmed and under-resourced.

To fix this we need:

Looking at SMR as a whole, we continue to see an increase in rates of violence from 2009 to 20154, reflective of wider state trends.  Police call-outs to family violence incidents in the region have doubled over the last decade.

Within our region, there are significant pockets where women do not feel safe. Several of our local government areas scored quite low when replying to the question “How safe do you feel walking alone in the local area by night?” Casey, Frankston and Greater Dandenong fared worst with most female participants answering that they Did Not Feel safe walking alone at night in the local area. Six out of the 10 municipalities within the SMR scored below the state average of 63.1%. In contrast, females in the municipalities of Bayside (71.8%), Port Phillip (71.9%), Mornington Peninsula (67.8%) and Stonnington (69%) scored higher when answering the same question5.